– Theresa O'Donohoe – Life as a Change Maker and Mother of 5 –

I headed to the green schools expo last Wednesday soon after news of the proposed Direct Provision centre for Lisdoonvarna broke. I missed the first community meeting and given my recent burnout was happy to be away from it all to be honest. I got the feeling things were not going well at home so was happy to stay in Dublin until Sunday.

I hadn’t planned attending the second community meeting on Monday February 26th but a friend was going on her own so at the very last minute I went and surprised her at the door. There were over 150 people there to prepare a list of questions for the RIA Reception and Integration Agency. I ended up facilitating the meeting and compiling the questions. Here are all of the questions to and subsequent answers from the RIA who replied to them within 2 days, ahead of a planned meeting with officials for February 28th.

Unfortunately the weather turned as we embraced the Beast from the East and storm Emma so the officials cancelled. However that was pretty useful because we had an opportunity to run through their replies and create a new list based on their answers to our original questions. Here’s that second list which is going to officials before March 5th. It is envisaged that the meeting will be rescheduled for this coming week.

Again I facilitated and we started with a few words from Sarah of Clare PPN who was there in a personal capacity. Sarah has a lot of insight into the Direct Provision system in Ireland and was on hand for questions as they arose. She outlined the position of the PPN and subsequent press release which you can access here. It states:

Clare PPN would further recommend that communities should be fully informed and consulted on all plans that affect them and notes that consultations with relevant stakeholders such as schools, doctors and other service providers do not appear to have taken place in Lisdoonvarna. Representatives from Clare PPN attended the meeting which took place last night in Lisdoonvarna and noted that many people attending raised concerns that could easily have been addressed through proper planning, information sharing and consultation. Clare PPN calls on RIA and the Department of Justice to act in the interests both of asylum seekers and host communities to ensure that the necessary services, staff vetting and resource provision take place before any attempt to relocate people to any area.”

As well as a new list of questions on February 28th, we voted on the issue. It took a while to word the question in the Yes or No vote but in the end we went with “Do you want the proposed direct provision contract?” 197 people voted No while 15 voted Yes. Therefore the community of Lisdoonvarna voted against the proposed direct provision contract for the Thomond Hotel. Almost 1,800 people are on the register of electors in the parish and just over 200 voted so it’s far from a high turn out however it was representative of those who attended.

As facilitator to both meetings I noted a lot of compassion for asylum seekers and refugees. I noted a lot of frustration and disbelief at the fact that this contract was discussed and finalised without their input or knowledge. I also noted fear and concern about how the centre would impact the town, especially the education and health care services. The lists of questions clearly reflects the sentiments of the community. There is a lot of concern about the conditions asylum seekers are expected to live in, the impact of placing 115 more people into a village with less than 300 people and the total disregard for public participation in the planning.

The big unanswered question is whether the owner of the hotel has actually signed the contract. His evasion on answering this is not doing him, the community or the asylum seekers any favours. As the first group are due to arrive on March 12th the question should be answered pretty soon. There is a facebook page here if you would like to keep up to date with progress.

Thank you to Karin Funke for the fabulous photos of our snow covered village. 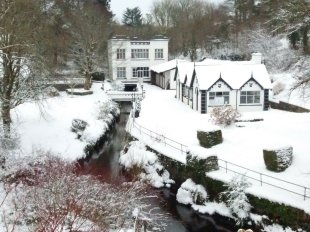 4 thoughts on “Lisdoonvarna and the Direct Provision Contract”

Check out my recent posts