Connecting with activists on the far side of the world was a very soul nurturing experience. It’s always great to have allies in activism and the nearer the better when it comes to community action. In Ireland we have a great network of activists who collaborate across many issues. However it is also great to know that there are forces on the move further afield and that around the globe there are armies of people standing up for future generations. Too often I only find out about these people when they have been murdered for their passions. Not this time. The first nations of America are well and truly alive protecting their water and ancient sacred grounds.

Last week activists in North Dakota, where they are attempting to prevent a pipeline from destroying their land and water, sought a “Vigil for Standing Rock”. They wanted people around the world to take some time on October 30th to pray for everyone involved. It was a beautiful idea and you can read more about it here with more photos from our event here. 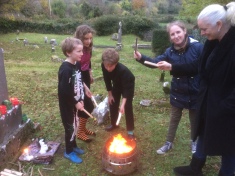 There are so many levels to connect with this action. The young people are taking a stand against the destruction of their land and water. Women are mobilising, there are many strong, passionate, articulate women of all ages. Indigenous people are coming together – tribes that have not collaborated in years are united in this common cause. A cause that I share. That so many people share.

I was compelled to bring this vigil to my own sacred grounds in County Clare – where many of my ancestors are buried. I needed to reflect in a scared place, to draw on the wisdom and guidance I get when I spend time with my elders. I did not regret my decision. It was very beautiful to cross so many paths in one afternoon. We stood amongst the burial site of our elders in solidarity with indigenous people doing the exact same thing for the same reasons, all around the world. There were vigils all over the world, all showing solidarity with Standing Rock.

The fact that these water protectors are indigenous people in North America made it all the more special. Choctaw Indians supported Irish people during the famine in the 1840s. They have always had a massive place in my heart. They are more connected with nature, consider the impacts of their decisions on the 7 generations to come. Some may say that this has eased up with time but nonetheless the sentiment of intergenerational equality is in their blood. Justice is in their genes.

Thanks to those who came along making it a beautiful vigil. Especially for setting the scene and the mood. This year I planted the bean “Cherokee Trail of Tears“. It was an obvious choice for me from the Irish Seedsavers catalogue. It seemed appropriate to bring these beans when we  came together in solidarity with Standing Rock. The rest are now drying out in the tunnel.

Recently there has been a drive to get people to divest from fossil fuel. Now investors in the Dakota Pipeline have been specifically targeted in response to Standing Rock. Here’s a link to a call by producer/editor Matthew Cooke on Youtube. He does a pretty good job of explaining it while going through the motions.

The Guardian did a good Who, What and Why of the Dakota Pipeline, available here.

Irish Central have an article on how the Choctaw Indians raised money for the Irish Great Hunger relief here.

Here’s a little poem I wrote about Gleninagh graveyard a couple of years ago.