One of the highlights of representing Ireland at the International Transition Gathering in Devon recently was the celebration of the project that got the ball rolling on this global movement to build resilience while focusing on a  low carbon, local economy. It all began in Kinsale, a small town in county Cork, Ireland.

My stay began with an introductory evening amongst all of the other country representatives. Everyone had an opportunity to give an update of transition in their country. I had brought the invitation to Transition Town Kinsales 10th birthday party which served as a reminder to where this movement has it’s roots. The following day at the conference launch when everyone sang “Happy Birthday” to Kinsale I was consumed with national pride 🙂

It’s over 10 years since the permaculture class at the Kinsale College of further education set about considering peak oil and climate change impacts upon the town. Over the course of the coming months they developed an energy descent action plan based on building local resilience. The plan went on to be adopted by the town council.

Their teacher, Rob Hopkins, moved to Devon in England and collaborated with others to establish Transition Town Totnes. So began a movement that spread virally around the globe.

Let’s just consider that for a moment. This is a movement that spans the world. There are 1,107 registered transition initiatives and more not registered. There are transition groups in about 50 countries. You can see them here. All because a class in Kinsale explored the crises of our time and came up with a way to potentially mitigate and adapt to their impacts. I spent 5 days with people from all over the world discussing the coordination of their national hubs.

So what is transition. Taken from the Transition Network site explainer page where you can see videos of people telling it as they see it.

“Transition is a quiet revolution unfolding around the world. People like you and I are seeing crisis as the opportunity for doing something different, something extraordinary. The guy sat next to you on the train this morning may well be setting up a community brewery. The woman opposite could be the director of a community energy company. The driver could own shares in a local farm. It’s everywhere.

It’s an idea about the future, an optimistic, practical idea. And it’s a movement you can join. There are people near you who are optimistic and practical too. And it’s something you can actually do.

Transition is one manifestation of the idea that local action can change the world; one attempt to create a supportive, nurturing, healthy context in which the practical solutions the world needs can flourish. You may have heard of it as ‘Transition towns’, or you may have come across a Transition group where you live. It is an experiment kicked off by people who share this passion, one that has gone far and wide, popping up in the most unexpected of places, in thousands of communities in 40 countries around the world.”

Celebrating the 10 year mark at the conference made it all the more special for me. I got to present an update on transition in Ireland to the representatives of 25 other countries attending the hubs gathering which was happening around the conference. I stood 6 inches taller when showing the invitation to Transition Town Kinsales 10th birthday. Very often the focus of transition is on Totnes so it was nice to remind everyone of it’s roots.

I was very happy when Rob was invited to address the launch of the transition conference and began by rousing everyone to sing happy birthday to Kinsale. I think I stretched another 6 inches. It’s on youtube here.

In all a great celebration of a little town in Co Cork Ireland. Thank you Transition Town Kinsale for bringing hope, courage and strength to so many people around the world. The people I spent 5 days with in mid September are all so committed and so proud to be associated with a global movement that you started, a little town in County Cork, Ireland.

So I came home from Devon and decided to head to Transition Town Kinsales 10th birthday party. The first of many events planned for this special year. Well done folks 🙂

If you want to get involved in Transition in Ireland please email tinireland at gmail.com.

Transition Networks report on the conference

Some photos from the party in Kinsale: 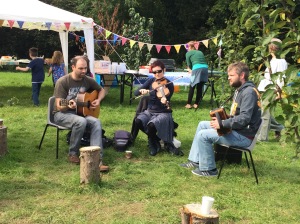 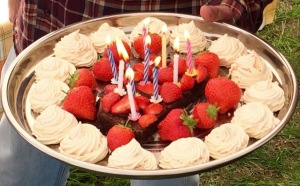 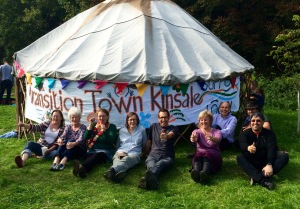