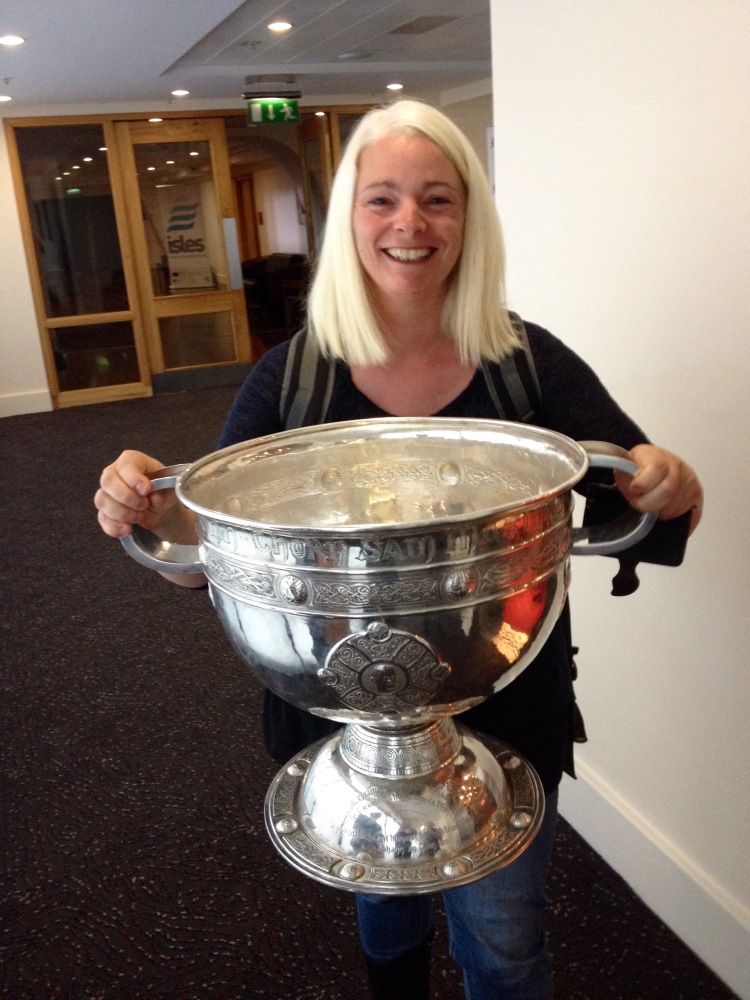 Back in 1986 I dreamed of playing camogie with Ballyboden in Croke park. Little did I expect my big game to involve “a leading Irish law firm” at an energy conference in 2015 and my team to be the Environmental Pillar.

For me, day two of the energy Ireland conference started at 6am. I was going to the breakfast briefing “Energy Projects – Community and Stakeholder Engagement” but despite my early rising I walked in a little late. Just in time to hear the presenter, in a northern accent, refer to the Donegal football team playing defensive football, while attacking, advising the audience that this is now the way energy developers should approach planning. It worked for Donegal in 2012.

I wasn’t quite prepared for what I was about to hear. Probably as ill prepared as she was for my reaction. I sat through possibly the most divisive, us and them advisory session I’ve ever heard. I’ve been to community meetings voicing similar sentiments but I wasn’t expecting to hear it quite as divisively from a legal adviser to the energy industry. Then again retaining the “us and them” divide keeps legal teams in business.

Apparently objectors are like 4yr olds that won’t eat their vegetables and the energy industry are like parents coaxing them to take some. Eat half = amendments to plans. You’ll get desert = community gain.

There was some praise for the objectors- People over Wind are “incredibly sophisticated” in their use of Facebook.

She did have some good advice but mostly from the view of how it might benefit the application. Early consultations may enable a developer to gain local knowledge of habitats that NPWS are unaware of. This could then be managed by engaging a species specific ecologist at the start, who must talk with the legal team early on. Apparently wording is key to a successful appropriate assessment.

It also allows the developer to learn about a community specific need, something the community cares about. This is valuable when considering community gain. For example there may be a sick child the community is concerned about. She did believe compensation for the disruption was valid but jerseys for the local GAA team isn’t working anymore. I’m not sure emotional manipulation is the answer though.

The final summary advice is here …..

So to feedback and the silence. I eventually spoke. I’ve been told that I lambasted her in a diplomatic respectful way. I said I was disgusted with the language used. I was disturbed by the divisive nature of the content and I couldn’t believe what I’d heard. I was obviously very irritated.

I defended the publics right to an equal playing field. Industry have the technical knowledge, legal advice and financial resources to progress development long before the public are even aware of their plans. “Proper” consultation comes back to the call from the People’s Energy Charter for comprehensive public participation. To me it means that a community needs the time and resources to adequately engage with the proposals at the same level as the developer.

I explained how the companies that had gone into the midlands caused massive damage and put our energy transition back years. I agreed about not being project specific but realistically, along with government, they have an awful lot of damage to answer for. On the flip side we now have a lot more people better prepared for the energy debate. Let’s not get carried away thinking the debate is ongoing. It’s not and this briefing proved it. We’re still at the sidelines drawing up our battle plans.

I think it’s safe to say that she hadn’t expected that response and hastened to add that the references to children and vegetables wasn’t meant to be offensive. All of a sudden I had become “them”.

A lively conversation ensued and I think most people left knowing that the only thing I’m anti is injustice. We live in a society where growth at all costs is the mantra even at the expense of our citizens, communities and environment. Eventually the conversation came around to the fact that collaboration is key to our successful transition.

I was happy with the amount of support and agreement I got during the feedback session and it followed as the day went on. Many industry people seem sincere in their willingness to make it work. So much so that they’re considering how collaboration and cooperation might work. A major turn around in my view and very welcome.

We really need proactive communities coming up with solutions to our energy transition. It’s much more favourable than developer led dictate. We need decisive leadership from government ensuring the urgency of climate change is filtering to local government and communities. Its also imperative that communities are supported in their efforts to transition.

So the day ended with me walking into the lift and into the Sam Maguire cup! Now, looking back at how the breakfast briefing evolved, how playing defensive while attacking is supposedly the way to get your project over the line, I thought it symbolic that I ended up holding the cup 😀

5 thoughts on “Up for the Game at Croke Park”